Can I get a divorce without a lawyer in Massachusetts? 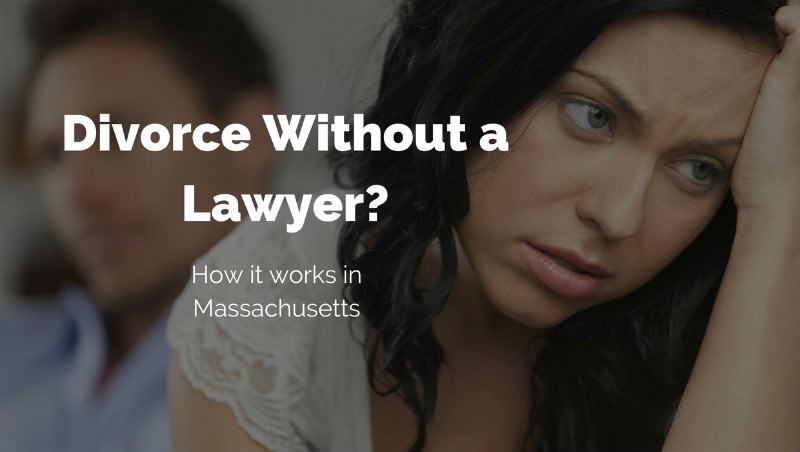 Do I Need a Divorce Lawyer in Massachusetts?

Going through a divorce is difficult and stressful as you struggle with dividing property, living arrangements and custody of your children. You may not know who to call, where to get advice or wonder if you can get a divorce without a lawyer ’s assistance. In Massachusetts, you are not required to use an attorney when you get a divorce. However, before you decide to obtain a divorce without an attorney, there are important factors you need to consider.

Can I File for Divorce in Massachusetts?

In order to file for divorce in Massachusetts, you have to meet one of the following criteria:

If the Court finds that the person filing for divorce moved to the Commonwealth to obtain a divorce and has lived here for less than one year, the Court will not enter a divorce.

Types of Divorce in Massachusetts

The first thing to understand before choosing to divorce without a lawyer advice is the types of divorce available to you in Massachusetts. There are two statutes that have helped name the two types of divorces – a “1A” divorce and a “1B” divorce.

Uncontested Divorce in MA – “1A”

An uncontested “1A” Divorce is a joint decision between spouses who agree that their marriage is irretrievably broken who have reached an agreement for child support, parenting time, custody, alimony and a division of the marital estate. In this type of uncontested divorce, you can file papers on your own at the local courthouse. Although parties are permitted to file a “1A” divorce without a lawyer, there is much at stake regarding children, support and the marital estate, therefore it is always a good idea to seek the advice of an attorney prior to filing.

Contested Divorce in MA – “1B”

“1B” divorces are inherently contested because there is a plaintiff and a defendant in the action. Contested divorces almost always have one reason as “grounds” for the divorce – “irretrievable breakdown.” This is a “no-fault” reason for divorce. There are fault-based grounds for a divorce, but they are extremely rare and some are not recognized by the court anymore.

It is recommended that a party hires a lawyer for a contested divorce because an attorney can provide advice on the likely outcome on matters involving the children, support, and dividing the marital estate. A lawyer can also advocate for you in court and will be better versed in applying the facts of your case with the law.

At some point in the divorce, the parties usually come to an agreement. If that is the case, the court will permit the parties to convert their “1B” divorce to an uncontested “1A”divorce.

A contested divorce will cause the court to implement an automatic financial restraining order that prohibits parties from changing beneficiaries on insurance or retirement assets, incurring debt in the other person’s name or converting assets without joint or court approval. Essentially, once a divorce is filed, it is important to keep the financial “status quo.”

In a fault divorce, Massachusetts law requires the person filing for divorce to provide a specific reason for ending the marriage. In Massachusetts, a fault-based divorce can only be granted if the person who files can prove one of the following seven reasons exist in the marriage:

If you need to file a fault-based divorce in Massachusetts, please realize they are very rare and an attorney will be necessary. The methods used to prove fault in a divorce can be confusing and failure to follow court rules could result in your case being dismissed. An attorney will conduct investigations, interview witnesses and collect evidence that will support your claim.

It is quite rare that a divorce is finalized for a reason other than “irretrievable breakdown” of the marriage.

Legal separation in Massachusetts does not exist, but there is a process known as separate support, if you need support from a spouse because you have been deserted by a spouse or are living apart for justifiable cause. You can also obtain custody of children, have a home conveyed, and if there are issues regarding personal space, the judge can order that your spouse not impose any restraint upon your personal liberty.

This process involves obtaining certified copies of documents and, if you have children, an affidavit regarding their care and custody. It is recommended you obtain an attorney to help with this type of complaint.

Filing for Divorce in Massachusetts

If you choose to divorce without a lawyer in Massachusetts, you will have to complete and submit many documents that are certified, notarized or signed under the pains and penalties of perjury. These documents are very important and can impact your life in many ways. It is very important that the documents are accurate otherwise your divorce could be dismissed or you could not get the things that you and your spouse thought that you were agreeing to. The Separation Agreement is the most important document filed in a divorce and unless that is completed the right way, you could hurt yourself financially, impact your ability to see your children or pay more support than you should be or not receive the amount of support to which you are entitled. Only a lawyer knows how to navigate the topics that a divorce addresses.

In Massachusetts, you may choose to use divorce mediation rather than a court hearing to end your marriage. Mediation is completely voluntary, and the decision of the mediator is not binding. However, it is a good way to create a separation agreement that can then be used to file a “1A” divorce without an attorney.

How Long Does it Take

Whether you use an attorney or not, your divorce does not become final immediately.

In a “1A” divorce, once a judge has determined that the marriage is irretrievably broken, a judgment nisi, the time between the granting of the divorce and when it becomes final, is issued after 30 days. This gives you and your spouse time to change your mind or confirm that both parties were truthful in court. The judgment nisi becomes final 90 days after it is entered. This means you cannot remarry until at least 120 days after the judge approves your “1A” divorce.

If you filed a “1B” divorce, it may take longer for your divorce to become final. If you and your spouse cannot come to an agreement on support, children or marital assets, a trial will be scheduled, and the judge will make the decision. Once that judgment is entered, it becomes final 90 days later.

Because the divorce process in Massachusetts can be complicated, even if you plan to file a “1A” divorce, it is recommended that you speak to an attorney to protect your rights.