Medical Malpractice or Negligence – What You need to know 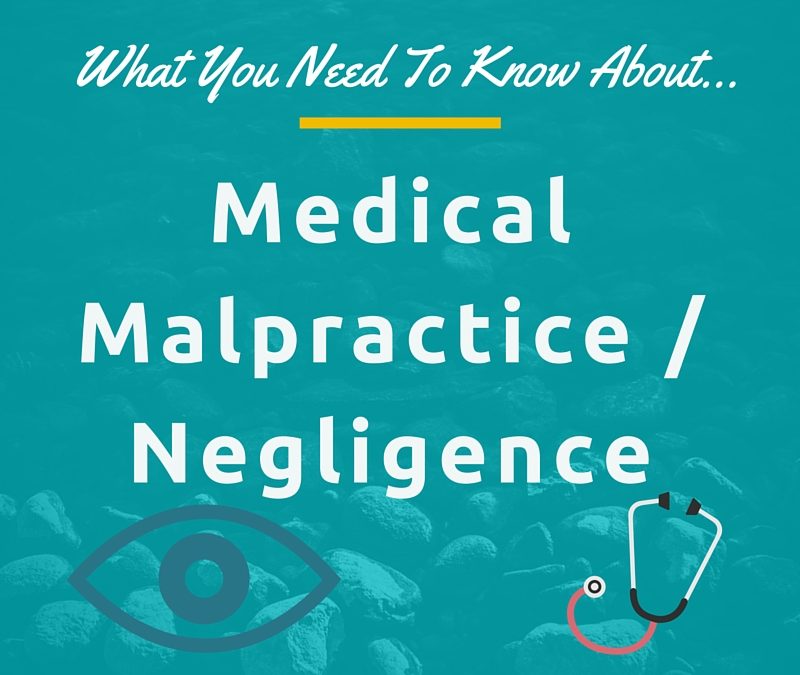 Medical malpractice is among the leading causes of accidental death in the United States. In fact, according to the Centers for Disease Control and Prevention, approximately 200,000 accidental deaths that occur every year are due to medical negligence that could have been prevented had doctors not breached their duties to their patients. Of those approximate 200,000 deaths, half of them can be attributed to hospital-acquired infections while the other half can be attributed to medical errors. Regardless of whether you or your loved one’s injury or death was caused by a hospital-acquired infection or a medical error, in order for the incident to be classified as medical malpractice, it must meet all the conditions set forth by Massachusetts law that qualify it to be classified as such.

There are four major components that an incident must meet in order to be able to be called medical negligence leading to personal injury: duty, breach, injury and damages.

Duty refers to the doctor’s duty to the patient once a doctor-patient relationship has been established. For instance, if your child falls and deeply cuts his or her knee and you rush your child to a doctor who examines the cut and informs you that it would only take a few stitches to address the issue and that he or she could perform the procedure, then a doctor-patient relationship has been entered into. Once the doctor agrees to treat your child, the doctor then owes your child the duty of providing the generally accepted treatment that other doctors in the same position would provide. This basically means that the doctor has a duty to provide treatment that is equal to the quality generally accepted by the medical community.

A breach of the doctor’s duty to the patient occurs when the doctor fails to provide the level of care that is generally accepted by the medical community to the patient. For instance, when you rush your child to the doctor with a deep cut on his or her knee and the doctor, distracted or in a rush himself or herself, grabs the first tools on the top of the table without ensuring that they are sterilized and uses them on your child, then the doctor has breached his or her duty to your child. If the equipment used to treat your child’s wound wasn’t sterilized and was just used on a prior patient, then the doctor has breached his or her duty by violating office protocol by not ensuring that he or she was using sterilized equipment to treat your child’s wound. By using tools that weren’t properly sterilized, your child was put at risk.

Although a doctor may have established a duty to a patient and then breached it, that alone is not enough to qualify the incident as medical malpractice. In order of the incident to truly be considered negligent, the patient must sustain a personal injury. For instance, in the example above, when the doctor used equipment that wasn’t properly sterilized on your child, your child must sustain an injury that is a direct result of the doctor’s actions in order for the incident to be considered negligent. Perhaps your child got an infection due to the doctor using un-sterilized tools. In a medical malpractice claim, you and your attorney must prove that the infection that your child sustained was a direct result of the doctor’s negligence in using un-sterilized equipment to treat your child’s wound.

Lastly, the patient must also suffer damages as a direct result of the injury that he or she sustained due to the doctor’s breach of duty to the patient. For instance, if the infection in your child’s wound led to hospitalization and further medical treatment that contributed to additional medical costs, then that is considered damages. Although this is an example of economic damages, damages may also be non-economical. For instance, a patient might also suffer emotional or physical damages instead or in addition to economic damages, and the incident can still be classified as medical malpractice.

An attorney can assist you in filing and presenting your medical malpractice case, and an attorney can also examine your case to help you determine whether or not it meets all the above four criteria in order to be eligible to be classified as medical negligence. However, in almost all cases, it is necessary to have medical experts to provide witness testimony to the court in support of your claim. An attorney can assist you in finding expert medical witnesses who can testify to the court what the generally accepted standard of care was and how the doctor breached that generally accepted standard. Getting a medical expert who specializes in the same field as the doctor being sued is best since his or her opinion will be considered to be competent, knowledgeable about the particular injury and well-founded.

There is a statute of limitations in most states for medical malpractice lawsuits to be filed. In Massachusetts, plaintiffs have three years after the incident to wage a medical malpractice lawsuit against the administering doctor. However, these three years start after the date of discovery, which is the time after which the patient discovers, or should have reasonably discovered, the injury that occurred due to the doctor’s negligence.

Each state determines the maximum amount that patients can collect in pain and suffering and other damages for medical malpractice claims. In Massachusetts, patients can receive up to $500,000 for pain and suffering in relation to any injuries that the court deems the doctor is liable for due to his or her negligence. However, in special cases where there is a substantial loss in bodily function or impairment to the patient, then the court might choose to award even more in pain and suffering, embarrassment, loss of companionship and so on to the patient.

Massachusetts law has what are known as “Good Samaritan” statues set in place to protect those doctors who come forth in emergency situations to render medical care to individuals without charging a fee. For instance, if your child is injured during a softball game and a doctor in attendance of the event rushes onto the scene and volunteers his or her services to provide emergency care, then you generally cannot sue the doctor if an injury is sustained as a result of that emergency care since that care was provided free or charge and in good faith by the “good Samaritan” doctor.

There are numerous types of medical malpractice, but medical negligence incidents generally fall into one of three categories.

Failure to Warn of Risks

Doctors have a duty to warn their patients of the risks that they are taking in receiving treatment or undergoing certain medical procedures. If doctors fail to properly warn their patients of the known risks that they take by undergoing certain procedures or receiving types of treatment, then the patient can wage a medical malpractice lawsuit against the doctor. Patients have a right to know the risks that they are taking and to then decide whether or not they are willing to take those risks in order to have their conditions treated. If the patient is injured by a procedure and wasn’t properly informed of the risks beforehand, then the doctor could very well be held liable for the injuries.

When doctors treat patients, they have a duty to provide treatment that meets the generally accepted standards of the medical community, and if they don’t do so, then they could be held liable for any injuries that the patient sustains. For instance, if a doctor treats a patient in a manner that other doctors wouldn’t and the patient is injured, then the incident could be considered negligent. Likewise, even if the doctor does treat the patient as other doctors would but makes a mistake that leads to an injury to the patient, it could be considered negligent.

If you believe that you or a loved one has suffered injury due to the negligence of a doctor, contact a good medical malpractice attorney today. An attorney can assist you with determining whether or not you have a valid medical malpractice or negligence claim for your personal injury, and if you do, then he or she can also assist you in filing and proving your claim to secure you the most favorable settlement.