What You Need to Know About the MA Criminal Defense Process 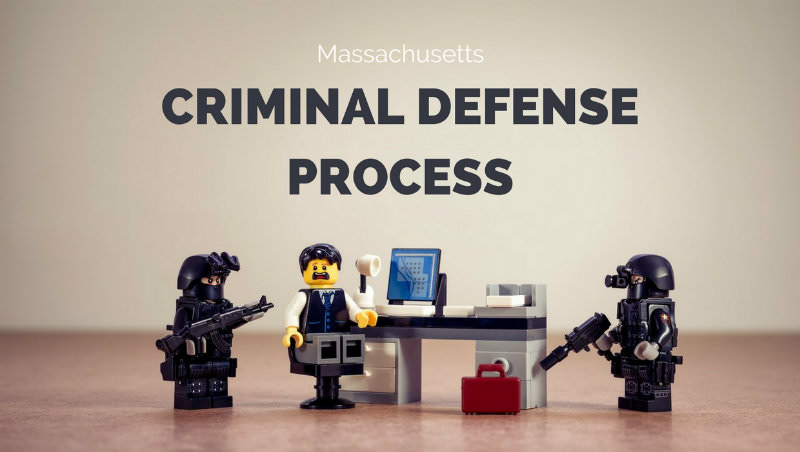 If you have been charged with a crime in Massachusetts, the MA criminal defense process can be a scary and intimidating time of your life. The most important thing to remember is to remain level headed and get an attorney to defend you right away. A lawyer can evaluate the case and help guide you through the criminal court process so it won’t feel like your life as you know it is over for good.

Remember that you are presumed innocent unless you are proven guilty beyond a reasonable doubt in a court of law under the Massachusetts criminal process.

Massachusetts Criminal Procedure Starts with a Citation or Arrest

If a police officer believes you have committed a less serious misdemeanor crime, they may make the choice to give you a paper citation to appear for a show cause hearing in lieu of arresting you. Do not ignore this, because a minor crime can turn serious if you ignore this citation. It is still important to consult with an attorney because following the proper criminal defense process and having good legal representation at the initial hearing, you may be able to get the charges dropped or lowered.

Most crimes result in an actual arrest, especially if you are being charged with a felony crime. This criminal procedure will result in you being brought to the police department for processing and booking. You will also be given a future time to appear for an arraignment, unless you are held without the right to bail or fail to post bail in which case you will be brought to court the following morning. Many times, you will be searched as well as read the Miranda Rights. Experiencing this for the first time can be downright scary and you may not know what to do next. It is important that you not speak with the police until first consulting an attorney, even if you feel you have done nothing wrong.

It is imperative that you retain an attorney without delay after an arrest so that they have sufficient time to prepare for your case prior to the hearing and explain everything you may expect to encounter in the future.

For most misdemeanors, the clerk magistrate’s hearing, also called a “show cause” hearing, is the time the Commonwealth must identify enough evidence that enables them to charge you with the crime. In fact, you are not formally charged unless and until the magistrate decides there is probable cause to allow a criminal complaint to issue.

Usually, bail will be set by clerk within the first few hours after you are arrested and you are allowed to pay the amount of the bail to be released.

Arraignment hearings are usually scheduled for those charged with a more serious felony crimes.

The 3 most probable reasons for you to be asked to appear for an arraignment in a Massachusetts District Court are:

At this hearing, the criminal defense process in Massachusetts dictates that you will be formally informed and read the state criminal charges against you. You will also be asked to make a plea of guilty or not guilty at this time.

If you are not represented by a lawyer yet, the court will normally enter a “not guilty” plea on your behalf. If requested by the prosecutor, bail will be determined at the arraignment hearing. Depending on what the judge decides, you will either be released without the need to post bail or need to post the amount of bail decided by the judge before you are released or held without the right to bail until trial. If you are granted and can make bail, you will be released until your trial date.

Although it is not necessary to have hired an attorney for the arraignment, it should be done as soon as possible due to their knowledge of criminal law and procedure . If you appear without an attorney at the arraignment, very little will happen in your favor and the charges most likely will not be dismissed at that time.

Prior to trial, your lawyer, as well as the prosecutor, will likely try to negotiate a plea bargain, also known as a plea agreement. In exchange for a guilty plea or a continuance without finding (CWOF), the prosecutor may agree to lesser charges or a lighter sentence.

A CWOF, or no-contest plea, is much better on your record because you can answer you have not been convicted of a criminal offense.

During these settlement negotiations, your case will likely have many other hearings to determine many pre-trial issues. Most of these will be what is called “motion hearings” dealing with evidence and discovery issues. This is a very important process and if done well can increase the likelihood of successfully defending against the criminal charges.

If the case goes to trial without a plea bargain, the trial process consists of several stages one must go through, including:

By far the longest step of the trial is the presentation of evidence conducted by both the defense and the prosecution. All criminal procedure rules must be followed. Each side presents the merits of their case, while often challenging what the other side says and presents. This is when your attorney will reveal errors or gaps in the Commonwealth’s case against you, while the prosecutor does everything to try to prove you are guilty beyond a reasonable doubt.

The criminal trial can be a hostile, adversarial process. The criminal defense process is not for the meek or timid. You and your attorney will be pitted strongly against the state’s prosecutors, and at times it can get heated and loud. That is how each side try to prove their points in the strongest possible ways.

If the court finds you guilty of the crime, the judge will likely sentence you immediately if the hearing was for a misdemeanor offense. If it is a felony charge, sentencing is often delayed until a later court date. Sentencing can vary from a short probation period all the way up to life in prison without the possibility of parole, depending on the seriousness of the crime.

Minimum and maximum guidelines are used to determine a suitable sentence for each type of crime. Your criminal defense attorney will always protect your rights under the criminal legal process in MA to help you get the best outcome possible.