Massachusetts Tort Claims Act: Can I sue the government for negligence in MA 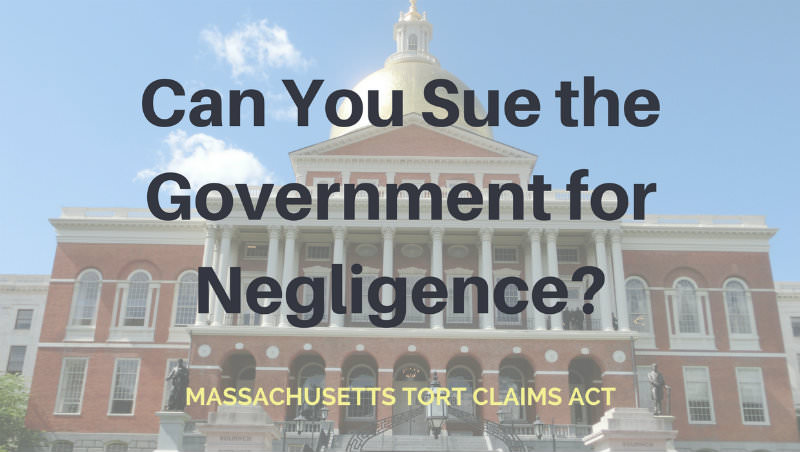 If you are hurt because of the negligence of a government employee or entity, the legal regulations and rules that must be followed appear in the Massachusetts Tort Claims Act (“MTCA”). This can present some unique challenges and difficulties, but an experienced personal injury law firm will know exactly how to pursue your case in the best manner possible.

What is Sovereign Immunity?

When a government employee negligently injures someone, or an individual is injured while on or in the property owned by a government entity, the injured victim will have to follow a strict set of procedures under the MTCA to prevail with a negligence claim.

That’s because these individuals and government entities are covered by wide sweeping protections under the concept called “Sovereign Immunity.”

This concept first originated from old English law. It is a legal doctrine that was formerly called “crown immunity,” based on the Latin phrase “rex non potest peccare.” Translated, it literally means “the king can do no wrong.”

That means a sovereign entity, which is defined as the federal government or the state or in the case of Massachusetts, the Commonwealth, as well as those who act on its behalf, cannot be claimed to have committed a legal wrong, regardless of the atrocity of the negligence shown. They cannot be sued or prosecuted for their actions, except under limited exceptions or waivers that we will discuss below.

Every state, including the Commonwealth of Massachusetts, now grants certain exceptions to this strict rule, which are called “sovereign immunity waivers.” The Massachusetts Tort Claims Act is such a waiver, and it controls the way claims can be made against the government for the negligence of its employees or for premise injuries on property the government owns.

Quoting section two of the Act, it begins by stating that “Public employers shall be liable for injury or loss of property or personal injury or death caused by the negligent or wrongful act or omission of any public employee while acting within the scope of his office or employment.”

These government public employees include cities, school districts, towns, committees, boards, and all government departments that have employer control over workers.

Even though the MTCA does severely limit the sovereign protection of the government, the act still places limits and restrictions, one being how much you can collect for your injuries and pain and suffering. Each plaintiff normally only can sue for up to $100,000 so to protect the government from catastrophic claims.

The full text of the MTCA dictates the liability, as well as the limits of liability, for government entities and employees regarding negligence. Below are just some brief key points:

The government has legal immunity in certain circumstances:

It may seem surprising and counter-intuitive, but many governmental vehicular accidents that cause damages through negligence result from emergency situations involving:

The speed at which they must go to quickly get to an area to serve the needs and health of the public clearly causes these types of accidents.

What Claims are Available Under the MTCA?

The MTCA enable you to sue the government for injuries and damages like suing a private company. Some typical claims allowed by the MTCA are:

Where to File Claims Against Municipal Governments

If your damage claim is against either a state or municipal government in Massachusetts, you must first file it with the executive officer of the government employer of the negligent employee. If you are filing against a municipal employee, you will then file it with the local municipality. The City of Boston and most other municipalities offer free forms and instructions on their websites on how to file a claim.

The statute of limitations in which to file the claim with the government is only two years from the date of injury. Then, the injured person must wait at least six months for the claim to be accepted or rejected before filing a complaint in Court.

If the claim is rejected, the injured party can then file with the Court. The court filing deadline is three years from the date of injury. These time limitations of the MTCA are strictly enforced and should not be ignored.

Due to the special circumstances when a government entity is involved and the MTCA comes into play, it is wise to seek the help of a personal injury lawyer familiar with the unique laws and rules that must be followed.